In the mid 1800’s, before Little Burgundy was a neighbourhood, the highest concentration of Montreal’s black population resided in a related geographic zone called St. Antoine ward. One of those residents was Shadrach Minkins: fugitive slave, restaurant owner, barber, father, proud community member. After his exciting escapes from Norfolk, Virginia, and then Boston, Massachusetts, Minkins settled in Montreal in 1851, likely hiding away on trains laden with cotton and other slave-trade products.

He had emancipated himself from slavery in Norfolk, and after a short time in Boston, was captured as one of the early victims of the Fugitive Slave act of 1850. During his trial, an organized crowd of black Bostonians forced their way into court and spirited Shadrach away.

Upon arrival in Montreal Shadrach creatively found ways to survive and thrive, especially with the aid of abolitionist communities and networks. He became a father, entrepreneur, and an active community member until his passing in 1875. During the mid 1850s, Minkins opened a restaurant in downtown Montreal, called “Uncle Tom’s Cabin”, named after Harriet Beecher Stowe’s famous anti-slavery novel. However, his longest-standing business was a barbershop on the corner of Mountain and St-Antoine–the very same corner where Rockhead’s Paradise was established some 70 years later. Barbershops in that time were not the black barbershops we know today–clientele would have been predominantly if not exclusively white men, and as such, the barbershop was likely a reminder of the strict occupational structure that by and large restricted black folks to the lower echelons of society. Despite such realities, the abilities of figures such as Shadrach to navigate these social and geographic spaces give testimony to the creative brilliance and resilience of the human spirit.  ‪#‎BlackHistoryMTL‬‪#‎IamBurgundy‬

At a recent workshop at Tyndale, the Standing on Their Shoulders team sat down with a dozen Tyndale youth, documentary filmmaker Sacha Obas and jazz legend Norman Marshall Villeneuve. The mission: to talk about all things jazz in Burgundy! 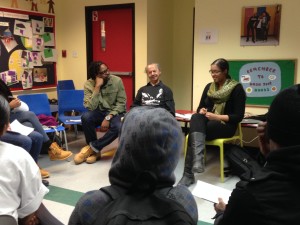 Mr. Villeneuve told us all about the glory days of Rockhead’s Paradise, sharing the stage with other jazz greats, and how important music was for many young people growing up in Burgundy. He started playing drums when he was only 12 years old! We were also treated to a demonstration of Mr. Villeneuve’s incredible skill.

To inspire the youth on their upcoming film project, Sacha shared some words of wisdom on filmmaking. He showed a short documentary from New York City and gave pointers on how to choose music for a film, how to craft a story from interviews, and how to choose what questions to ask!

We all left feeling very inspired!

A big thank you to Louise & Norman Villeneuve, and Sacha Obas for sharing their expertise with the youth!