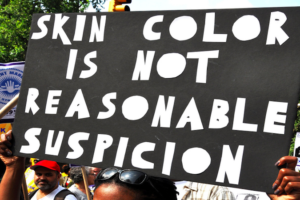 As a preliminary step before delving into this somewhat charged topic, it is useful to define racial profiling, as the Canadian populace, in general, use the term to mean different things. For this editorial, I am applying the term ‘racial profiling’ to refer to the law enforcement practice of taking the race of a potential suspect into account when deciding whether to initiate investigation of that suspect. To the more erudite, racial profiling can also be termed “racism in practice”, regardless of whether it is viewed using Heidegger’s phenomenological lens, or any other modes of optic aid. For such an overloaded term as racial profiling it is somewhat understandable that several definitions are attributable to it. To be engaged in racial profiling, race does not need to be considered to the exclusion of other factors. A profile will often contain a variety of factors; but, if one of them is race, then we have a racial profile. 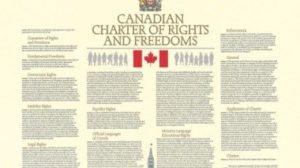 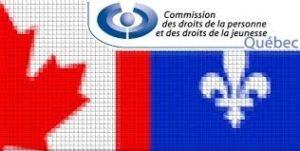 As stated in its mission, and dictated by its organizational values, the Canadian Charter of Rights and Freedoms, the Québec Charter of Human Rights and Freedoms, and the Service de Police de la Ville de Montréal (SPVM) stipulate that the services provided by the entire staff in all interactions with citizens be free from racial profiling. The SPVM Executive has also made a firm commitment to promote and maintain a strong stance against any type of illicit racial profiling. It is apparent that such a commitment exists only on paper and is not effective in reality. While racial profiling may be defined as unjustified actions by authority figures toward members of a particular race, ethnic group or religion, the actions of the Montreal Police in the 2008 killing of teen, Freddy Villanueva, have served to indelibly sear the issue into the public consciousness at large. Bear in mind that racial profiling is not limited exclusively to law enforcement, but also education and youth-protection systems, where it is seen that youths are unfairly labelled with the consequent risk of being channeled into the criminal justice system.

On November 30, 2016, in a decision on a case filed five years ago by Marcus Gordon, a Black urban entertainment professional, the Quebec Human Rights and Youth Rights Commission has ruled that he was indeed a victim of racial profiling by the Montreal Police and awarded a meagre sum of $2,000 in moral damages. Do Black civil rights matter especially when racial profiling is acknowledged? Despite the straightforward facts, the Commission took almost four years to complete the investigation of the complaint. To further compound matters, although the investigation was completed in January 2015, the Commission’s Complaints Committee only decided the case in October 2016. Despite the Centre for Research Action on Race Relations enquiry, the Commission declined to explain the 1.5 year wait. www.youtube.com/watch?v=knV-_5AEst8).

Currently, there are no racialized managers or members at the Commission. An Indigenous Commissioner has recently resigned, leaving the Commission without any racialized or English-speaking member who, among other functions, makes decisions on cases through the Complaints Committee. According to Fo Noemi, Director of CRARR, this decision sets an extremely disturbing precedent. It fails to send a dissuasive message to police officers and departments that practice racial profiling. Also, on the converse, it can be seen as a very persuasive message to victims of racial profiling that it is not worth filing complaints. A request for a review of the decision has been made by CRARR to the Commission’s interim President, Camil Picard.

With no surprise elements, the most common recurring and familiar instances of racial profiling in Montreal is what have come to be known as “Driving While Black” or (D.W.B). Racial profiling of this kind involves police stopping motorists under the guise that they have committed a traffic violation—usually a minor one. This is where things take a different turn and shape. Although the traffic violation may be the primary reason for the motorist being stopped, the actual underlying reason might include the race of the suspect. Police often assume that African-American drivers are more likely than their white driver counterparts to be transporting illegal drugs. This assumption has been the catalyst for a large number of roadside stops. 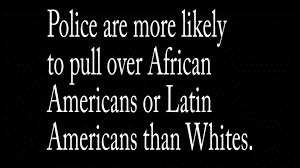 A few years ago, an individual by the name of Joel Debellefeuille was out for a drive with his wife and stepdaughter. For the purposes of this story it is important to note that the individual is Black and that the car he was driving was a BMW sport-utility vehicle. Joel was pulled over by two Longueil (Quebec) police constables, because, after running his plates, they reasoned that his name could not possibly match his skin colour. What is of interest in this horrible situation is how misinformed and uneducated these white officers were. For instance, they must have conveniently forgotten the processes of colonization that their ancestors inflicted on people of colour, which included, for enslaved Africans, the stripping of their African names and their replacement with the names of white European slave owners. How Debellefeuille presented himself was also not the deciding factor in his subjection to racial profiling. Rather, the unifying factor is that these Black people, who would all appear to be of middle or upper class backgrounds, dared to desire nice things (“high end” expensive purchases—cars etc.) for themselves. Debellefeuille refused to pay the tickets and persevered for two years in several courts in order to finally win his case. 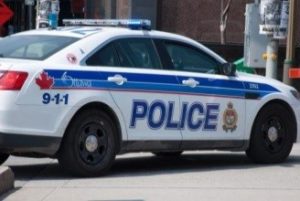 A similarly mundane, egregious and potentially lethal practice of racial profiling is: “Walking While Black.” This afflicts many in Montreal, as it surely does in other cities in Canada and elsewhere.

This next story is about Jimmy, a recent immigrant to Canada, and his first unhappy encounter with the Montreal Police. In May 2015, Trevaughn, a West Indian national, was walking along St. Catherine Street in the heart of downtown Montreal. He had recently emigrated from the West Indies to be reunited with his Canadian wife. Back on St. Catherine Street, he crossed an intersection beside two white pedestrians. Singled out by a white, French-speaking police officer, Trevaughn was asked to produce his identification without an explanation of his “offense.” However, this attention was not given to the other two white pedestrians with whom Jimmy had crossed the intersection, as they were not stopped and interrogated. A Spanish-speaker and recent immigrant to Quebec, he did not yet speak any French. Instead, the policeman insisted that he would only speak French and demanded that Trevaughn do the same. It is hard to comprehend the level of arrogance, malevolence, and insensitivity that motivated such a callous response on the part of a civil servant whose role it is to “serve and protect.” In conclusion, however, given the frequency of unwarranted police surveillance against Blacks, any type of racial profiling contains the seeds of potentially lethal violence. Traffic stops are a good indicator that the police must stop and evaluate their way forward. Acts such as driving, walking, shopping or banking while Black are not just mundane, they are a constant part of our daily realities in this part of the diaspora, and within the Canadian mosaic. As such, the potential for racist abuse is far too pervasive and needs to be immediately addressed.

Morton Weinfeld, a professor of sociology at McGill University, who holds the chair in Canadian Ethnic Studies, said that while action on racial profiling is needed, it is only the tip of the iceberg. “An even more profound problem is that of systemic racism in all dimensions of our society,” said Weinfeld, who pointed to immigration problems, cultural differences and poverty as examples of obstacles facing minority groups. “If racial profiling was eliminated tomorrow, we would still have profound racial inequalities,” he said. “And tackling those problems will be much more difficult and much more costly than simply dealing with racial profiling.” For my part, resolution lies in immediate remedial orientation in the burden of blackness for minority populations in western nations where the legacy of slavery and anti-black racism is alive and well in discriminatory practices like racist policing. There is still a great amount of denial on the part of the stakeholders where racial profiling is concerned; even after so much pain, yet so little gain. Nevertheless, Blacks must not give up the fight, but continue towards the light as victory is certainly not out of sight.

THE BLACK COMMUNITY FORUM SECRETARIAT: Some Clarifications on the Road Forw...We’re Hiring
Scroll to top