Standing on Their Shoulders Leaves a Lasting Impression

On Thursday, September 28th, the BCRC was asked to present the Standing on Their Shoulders videos (a past BCRC community project), to students at McGill, for community involvement day. The videos were very well received by the McGill students who signed up for the viewing. There was a discussion period, which followed the videos, in which students got to interact with two youth who were involved in creating the videos. We were also joined by a reporter from CBC.

The fact that Standing on Their Shoulders is still an important and talked about project, almost a year after its completion, shows how impactful this project was on the community. We are very proud of the hard work that our youth put into these videos and how they have positively impacted the community. Great work, Standing on Their Shoulders Team! 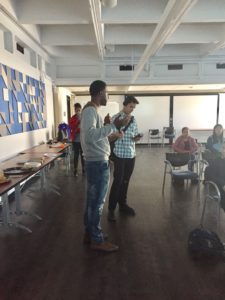 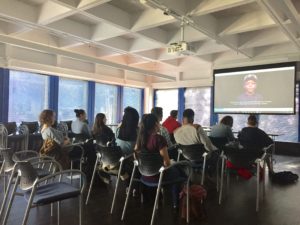 By the President of BCRC

This was presented to the Quebec Community Groups Network (QCGN) and submitted to the Montreal Hearings on Bill 105.

Language has become a very controversial topic in Quebec and Canada. In fact, the backlash of this controversy has directly impacted the Black English-speaking community, especially in Quebec. It forces us to pose the question, has Canada fooled itself in thinking that it could become a harmonious nation based on all God’s children, regardless of diversities? Quite simply, the English-speaking peoples of Quebec do not have the same rights as the French-speaking peoples of Quebec; nor do their institutions enjoy the same support as the French-speaking peoples living elsewhere in Canada. In a sense, it can be argued that the English-speaking peoples of Quebec were betrayed by their earlier leaders and abandoned to the fears of the French nationalism of Quebec. It all started with Pierre Elliott Trudeau’s not-withstanding clause, which the Premier of Quebec, Henri Bourassa, took full advantage of, in his quest for French nationalism. The language police sprang directly from this fear of the demise of the French language. However, in recent times they have become quite immature, and, perhaps, have reached the end of their usefulness to the changing Quebec landscape. Bill 86, for Blacks, no matter which boat our ancestors first stepped off of, is nasty business. And the fact that it is happening from within the camp of the liberals, who are supporters of Federalism, indicates the underlying misconceptions with which both sides are trying to build a harmonious diverse society.

We are quick to accuse and vilify other countries and areas for denying their citizens their basic rights; however, it never seems to register that we are living those same injustices here, right in our backyard. The Quebec Government restricts our choices of educational institutions and dictates the language that we do business in, even though, according to the Canadian Charter of Rights and Freedoms, we live in a bilingual multicultural National entity. They also dictate how we present, or express, ourselves in terms of the literary symbols we use to brand ourselves in the business sectors, limit our employment in the public sector on the basis of mother tongue spoken in the home, limit the strength and vitality of English Educational (Elementary and High Schools) institutions by denying all immigrants choice of schools, and they have created an institution of language police to enforce the signage rules. I am having real problems seeing the difference between what Quebec and Canada are doing, under the guise of preserving the French culture in Canada, and what these other “oppressive countries” are doing in order to preserve what they see as their own culture and ideas.

Thus, based on these considerations we argue that, under the Canadian Charter of Rights and Freedoms, Quebec language rights and culture are more secure throughout Canada than English language rights are in Quebec. Any threat to the French language now, is more imagined than real. Thus, the BCRC, and the Black Forum, urge the Government to respect the Constitutional Rights of the English-speaking peoples of Quebec. We urge the Government to use other ways of preserving and promoting the French language and Culture, without displaying the disregard that Bill 86 shows for those procedures and administrative arrangements essential to sustaining, in spirit and practice, the principles of a true democracy.

There is a tendency in both French-speaking Quebec and English Canada to confuse “equal” with “equality” when it comes to dealing with minorities. As Blacks, we are very aware of this problem, and suffer the consequences of those practices in the poor distribution of resources for sustaining the vitality of minority groups, whether it be in Quebec or elsewhere in Canada. We therefore fully agree with CQGN, when it says: “applying the same rules to everyone ensures that great sections of society will be disadvantaged. The principle of substantive equality is well founded in law, and has been proven time and again the best policy approach for achieving societal objectives. One size does not fit all.”

It may very well be that there are too many school Boards in the French sector. And that there are cost efficiencies to be gained in reducing the number of Boards. But, while that policy might be essential to a general strategy for improving the management of educational resources in the Province as a whole, it does not logically, or in any social and politically optimal sense, require that the Government reduce school Boards in the English minority sector by the same proportions. Furthermore, we agree with CQGN when it says:

“Schools are not simply places where children are instructed. They are the cornerstone of communities, and their management and control is there best effected. Centralizing the power to manage and control these institutions–separating them from their communities–reduces, and will eventually remove schools as community institutions. What region in Quebec is prepared to lose its English schools and communities?”

Therefore, we take this opportunity to strongly recommend that electoral rights of parents and the community, with respect to electing officers of school Boards, be retained as a fundamental democratic principle. But, we recommend that school Boards be required to reflect the communities they serve. Thus, we strongly recommend that school Boards be required to appoint Multicultural Multiracial Advisory Committees, similar to the system that was used by the English Montreal School Board, and which gave representation to the diverse populations in the school system under CODE: CS-13. [http://www.emsb.qc.ca/en/governance_en/pdf/BoardPolicies/CommunityServices/MCMREducation.pdf]

The EMSB terminated the function of the Advisory committee that worked with the Board in the implementation and over view of this policy. They did this in a rather undemocratic way and without consultation; because they had discretionary power to do so. We strongly suggest that this system be re-instated, and that the policy become part of the new act requiring that School Boards implement this policy. We applaud the Ministry decision to create seats for what it described as co-opted commissioners from the sport and health sectors. We urge the Ministry to expand this to include other organizations in the voluntary community sector and the racialized minority communities that are most at risk of exclusion and racial discrimination.

Armed with the Facts—Premier Couillard is called upon to act. Examination and Reformation of the Quebec Human Rights and Youth Rights Commission requested

As the issue on race relations persists in this country, especially the province of Quebec, the Quebec Human Rights and Youth Rights Commission has, by their actions, been brought into the fray, and is now the focus of glaring racial attention. From its initial inception, the Commission was specifically mandated to ensure that Québec’s laws, by-laws, standards and institutional practices, both public and private, comply with the Charter, which prohibits discrimination based on race, colour, ethnic or national origin and religion, in the exercise of human rights and freedoms. Sadly, however, the current structure of the Commission has failed to live up to this mandate, specifically, but not restricted to, senior managers, legal affairs and employment equity where, currently, there is no racial or linguistic diversity. There is also an unprecedented absence of Black English-speaking lawyers and investigators, since the Commission bade farewell to the last Black English-speaking lawyer, Mme. Esmeralda Thornhill, over two decades ago.

Included in the population of Quebec are the visible minority citizens who number about 850,000, of which over 1, 000,000 are English-speaking. While the Human Rights Commission benefits all citizens, one cannot lightly dismiss the fact that the citizens most likely to require the services under the mandate of the Human Rights and Youth Rights Commission are the minority populations. In order for the Commission to be seen as being true and fair to its mission and mandate, there must be people in the Commission who are, themselves, representatives of visible minorities and/or the English-speaking population. A clear understanding of the minority populations inhabiting Quebec must be foremost in the minds of those responsible for the nominations.

The Premier of Quebec, Hon. Philippe Couillard, as the holder of ultimate power, is called upon to act in a manner that is reflective of, not only his sterling governance, but also his government’s commitment to diversion and inclusivity, by examining and reforming the Commission. This is of critical importance, especially in light of the four, currently existing, vacancies that are soon to be filled at the Commission’s level. At risk is the public’s image of the Commission, as well as the underlying veracity of rendered decisions.

Decisions affecting minorities and communities of color will always be a litmus test of race relations with the Commission. For race relations to improve, the Quebec Human Rights and Youth Rights Commission need to have the moral courage to acknowledge systemic racism, speak truth to power and most importantly show by their composition that they are fulfilling their mandate in fighting racial discrimination and injustice. Blacks and other people of colour should not, through the displayed composition of the investigative parties, be left with no other alternative but to conclude that the Human Rights and Youth Rights Commission are pursuing their own agenda.

The current situation cannot, and must not, be allowed to go unchecked or unaddressed, as it blatantly constitutes a precondition for all to understand the material realities of racism that daily scars the lifescapes and landscapes of Blacks in Quebec. To those directly empowered at the appointees/nomination level, serious attention and consideration is required to the factors already stated, in addition to tangible actions that translate into policies designed to make and maintain a difference in the human rights, freedom and liberties of the population regardless of color, language, race or creed.

In addition, let this fact not be overlooked, that as long as racialized minorities fear and mistrust the Human Rights and Youth Rights Commission, then democracy has failed to live up to its ideals.