Glimpse the wartime world of mothers, daughters and wives in this colourful retrospective.

The Standing on Their Shoulders team and project participants are ready to launch the final video project! The 20 videos, dedicated to the Black, English-speaking history of Little Burgundy, will be released to the public this Black History Month, 2016.

This is a free event, and it is open to the public. Come and celebrate the hard work our youth put into artistic expression and preserving history.

Join us to to mark the official opening of the Housewife Heroines.

An exhibition about the many ways women served their country as homemakers and volunteers during World War II.

Presented by the Quebec Anglophone Heritage Network and the Beaurepaire-Beaconsfield Historical Society.

The Coloured Women’s Club of Montreal invites all ladies of all ages, cultures and backgrounds to a Black History Month Soirée, “HAIR-WE-ARE” on Saturday, February 27th at 6:00 PM, at 6767 Côte-des-Neiges, in Montreal.

Admission is $10.00 and a light evening buffet will be served.

For tickets or more information:

Hello, my name is Adanne and this is my story of following my roots. It all began when we decided to clean out the attic one rainy day. While cleaning we came across an old trunk that belonged to my great-grandmother.

Candomble, also called “dance in honour of the gods,” originated from African religions of the Yoruba, Fon and Bantu regions. However, Candomble also has a strong connection with Catholicism and is considered a syncretic religion because it incorporates various beliefs from different religions, including Islam (http://www.religionfacts.com/candomble). The Candomble worshipers believe that there is one almighty god, named Oludumaré, and various other lesser gods, called Orixas, who act as middlemen between the head god and the people, since people cannot communicate with Oludumaré directly. Each worshiper believes that they have a personal Orixas, who acts as their protector and controls their destiny. This is important since, according to the Candomble beliefs, there is no duality of good and bad; each person must simply fulfil their destiny. However, this is not a carte blanche, any evil you do to another will come back to you eventually.

Believers of Candomble practice their beliefs through dance. These carefully structured dances allow the believer to be possessed by the Orixas. Some of these Orixas’ are ancestor spirits, called Baba Egum, who regulate the community’s moral code through public demonstration during possession. The priests and priestess’s also masquerade as these spirits during important ceremonies.

During the slave trade slave owners and Church leaders felt it imperative to convert the African slaves to Christianity. It was because of this that they outlawed traditional African beliefs, and later Candomble, up until the 1970’s. As a way to keep their traditional beliefs the slaves outwardly practiced Christianity. However, they still met in secret to practice their beliefs and on special religious days. They hid their practices and symbols within the Christian faith, especially in connection with the Christian saints, which resembled their own Orixas. Many people now practice Candomble in the open as a way to reclaim their culture and history (http://www.bbc.co.uk/religion/religions/candomble/).

This was not so for my great-grandmother’s sister, who had to practice her religion in secret all of her life. It was through her letters that we learned of her struggle and dedication. This was why I was so interested in learning about this part of my family history and following my roots back to Brazil.

Please write us about your personal experiences with following your roots! Looking back at personal history allows a community to better understand their own history as a whole. It is through looking at these individual pieces that we begin to see the entire puzzle.

One such experience will be featured in Semaji every issue. Send any articles to ashlie.bienvenu90@gmail.com. We hope you decide to share your piece of the puzzle with the community. Thank you!

“The Standing On Their Shoulders project has been a rewarding and eye opening experience. As a minority overseas for much of my upbringing has left me with a desire to connect with black legacies and histories. By participating in this project I have learned a wealth about the rich history of Black folks in Montreal, stories that will leave me inspired for years to come. I greatly enjoyed the opportunity I had to speak with and interview such prominent individuals.”

“The “Standing on Their Shoulders” project seeks to uncover black anglophones’ hidden history through storytelling and visuals. It is our way of celebrating our achievements as a people and giving a voice to a community that has been marginalized out of history. We understand that knowledge of self is key to the growth and unity of black youth in Montreal and beyond.”

“We felt that this was an important project to take part in because there isn’t as much recognition for the people who have worked so hard to get Little Burgundy to where it is as there should be. My sister and I chose Jesse Maxwell-Smith because we found that her story was inspiring and that accomplishments like hers are something to strive for. We are extremely thankful that the Standing on Their Shoulders project gave us an opportunity to learn more about our community and someone who helped shape it.”

“Standing on Their Shoulders is a bridge, in my eyes, to the past in Montreal. They taught me so much about the undiscussed history of Montreal’s Black Community. Without them, I wouldn’t have gained that knowledge and they are a great contribution to the Black Community because of this project that allowed youths to dig into their roots and create something marvellous.” 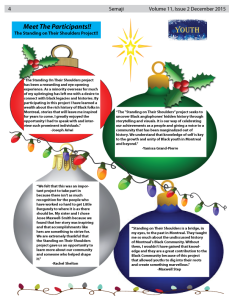 I am prompted to write this as a response to some reaction to “givings” by two Black sport personalities from the English speaking Black Community of Montreal. The first has to do with an abusive attack on the Erene Anthony Family for an alleged gift that was given to Selwyn House; although, in reality, this gift was initiated by Andre Demarais and patrons of the Selwyn House on behalf of the Anthony Family. The second has to do with an under-current of negative criticism from both the Black and larger Montreal community relating to PK Suban’s gift of ten million dollars to the Montreal Children’s Hospital. Considering the use that my family, and so many of my friends and their families, have made of the children’s hospital, I say to Suban, “Thank you PK. Thank you for underlining the fact that the Black Community is an equal participating partner in the creation of a more healthy society.” We have been contributing for an incredibly long time in many different ways; but, as Kevin, from his seat in the Dragon Den, would have said, “the money talks.” However, as we see from these previous examples, even money does not quite set one free.

There have been responses to this propensity for negative criticism coming from some unexpected sources, but it is, nevertheless, appreciated and welcomed. However, what I want to do here is to appeal to the rational conscious. We are agents in an environment, interacting between ourselves and our environments. The incredible thing about these multiple interactions is that they cause the environment to change and in turn the agents adapt or change in some unpredictable way. Then we interact in response to the changes in the environment in perpetuity. The world around including us is in constant multi-directional change. In this constantly evolving non-linear system, human agents have the advantage and capability of thought and innovative action. We are capable of learning by action and reflection. In addition, we are social and cultural agents capable of collaboration. Human beings in a landscape act to preserve life, to perpetuate it and to evolve as a species over time. The fundamental human objective is to increase longevity, the number of their species, the quality of life, and spiritual existence over time into the indefinite future.

Groups when faced with a common enemy tend to collaborate when collaboration offers the opportunity for the survival of the group and the members of the group. In a nation state, as belief systems approach states which guarantee security and greater fitness to a larger number of cultural and kinship groups, loyalties to the institutions responsible for improving increased fitness grow stronger among the different cultural and kinship groups. It should not be surprising therefore that Blacks would donate to hospitals that preserve and perpetuate lives.

Giving is a form of sharing, a social entrepreneurial act, and, at the same time, selfish and social. By definition it has to be so for it is motivated by the intelligent strategy which shows that the life of the individual can be extended and protected by preserving and protective the collective. It is selfish in the sense that we have come to realize that our individual chances for survival, the perpetuation and improvement in the quality of life increases when we share information and the surpluses of our creative abilities. So we have a vested and personal interest in sharing. It is social in the sense that we are capable of empathy and love. Being capable of love, we can care about the preservation and wellbeing of other lives and the preservation of the earth.

But, it is also clear that giving is spiritual. It has to do with the sense of being associated with acts that are seen as elevating the human spirit above its material existence, as well as the creation of a legacy that extends our lives through the collective spirit of the society long after the death of our physical and material self. I refer to this as purchasing one’s ticket to heaven in a blazing chariot of glory. However, just as the importance of the widow’s mite as a valuable social act should not be discounted, similarly, the importance of altruism of the wealthy as a motive for giving should not be downgraded. There are rich people who are altruistic in their giving.

There are also economic principles underlying giving that explain how one might go about deciding to give to one cause and not another. The overall objective would be to maximize the benefits over the collectivity in a socially cohesive manner. I think it is not difficult to imagine that a general rule could be that one should distribute one’s surpluses such that the greatest good is done for the greatest number of persons. I do not think that we could be justifiably critical of a social allocation of surpluses in which the intent was just that; and if, in fact, the benefits of that allocation could be evaluated to have been socially equitable, inclusive and cohesive. I think that the Children’s hospital of Montreal would qualify as such a cause for “giving”.

Finally the argument that such gifts are simply an attempt to dodge taxes is simplistic. The policy of tax exemptions for giving allows the donor the freedom to pick an appropriate cause, as opposed to having bureaucrats in the public sector and elected politicians decide on or select our causes for us. For what is not given is either taxed away or disappears unseen by the “Revenue Agency” or the general social collective. Governments also recognize that the private individual has legitimate priorities and preferences that differ from those of government distributive agencies. Accordingly, they respect those rights by exemption clauses in their tax laws. It follows that it is the right of every free being to distribute some of his or her surplus earnings as he or she believes to be most optimal socially, not according to loyalties imposed socially or otherwise.