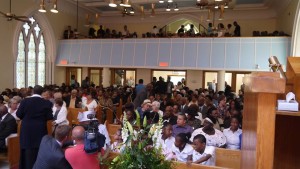 After four years of renovations, on Sunday, June 14th, the Union United Church, on Delisle Street bordering Little Burgundy, was reopened with a service of thanksgiving thanks to funding amounting to about 1.2 million dollars. The building was originally closed in 2011 in order to deal with the issues of mould and asbestos, as well as water damage and outdated wiring and plumbing. The reason for the four-year delay was because it was not an easy task to fundraise. In fact, they have only been able to obtain money to do the basic renovations, but luckily the rest of the renovations needed can be done with the congregation in attendance. During the four years the Union United Church services were held at Rosedale United in NDG but needed to move to Wesley United three months ago when Rosedale was sold. 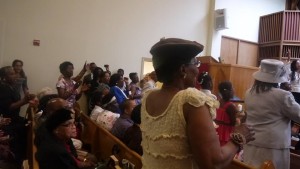 The Church was filled with its many members who were elated to be back to their original Church. The Church Choir was joyful and their songs of praise were the perfect backdrop to the congregation’s hymns of thanksgiving. It seemed like the entire United Church family and dignitaries of the community were in the pews, including Dr. Williams, so the best wishes flowed. Ms. Anthony, the Chair, acknowledged our historical project [Standing on Their Shoulders] and BCRC. 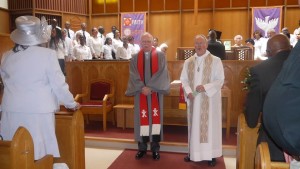 The congregation, which filled every pew and balcony in the Church, was treated to a performance from long-time Union United Church member and jazz legend, Oliver Jones. He played on the baby grand piano that he had just donated to the Church. Jones, quite dedicated to bringing the Church back to its former glory, will also be hosting a fundraiser on August 14th called the Dr. Oliver Jones Golf Tournament. 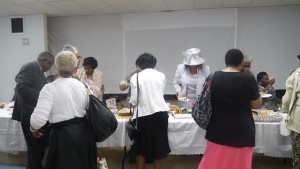 Saturday, June 13th turned out to be a beautiful, sunny day. Perfect, not only for the Dr. Charles Drew Blood Drive, but for the outdoor bar-b-q. This was possible thanks to BCRC’s partnership with the Hilarious Riders. This group of young professionals have created quite a buzz on their motorcycles fundraising for worthy projects in Montreal and abroad. Through their initiative they got numerous sponsors, including tapping into the generosity of our neighbour, Maxi, who provided the food and even allowed Hilarious Riders to use their parking lot to flip the burgers and grill the hot-dogs. The bar-b-q attracted a whole new crowd to the drive in our center–exactly what it was intended to do. We are happy to announce that the Blood Drive was a smashing success. We surpassed our goal of 75 and reached 92 donors.

Unfortunately, many of our generous community members were not able to give blood due to their low blood iron levels. Statistically, Black women have lower blood iron levels then white women, on which the standard iron levels are based. Good news, however! Héma-Québec will be lowering their iron level restrictions in August 2015 allowing more Blacks to donate.

Thanks to all of our community members who donated their time and their blood to a good cause. Thank you also, to our sponsors Maxi, Tim Hortons, and McDonald’s. We would also like to thank our partners in this undertaking, the Hilarious Riders. While this may have been a new partnership, it was very successful. We look forward to further collaboration in the future. 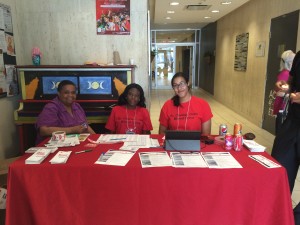 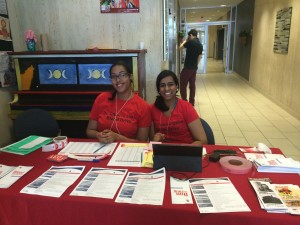 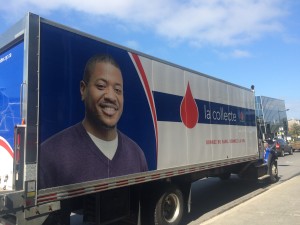 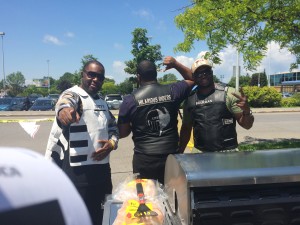 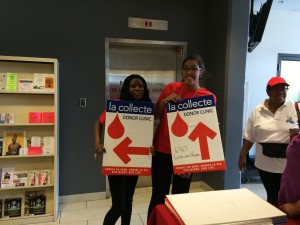 Adieu Jean Doré. Doré, former Mayor of Montreal, opened City Hall to all minorities by inviting them to participate in the democratic process of decision-making about the kind of city they wanted. During the Jean Drapeau administration, the Black community had acquired limited access to the city’s civil service due to the interventions of the Black Community Council of Quebec. As a result, some substantial community services in sport and recreation were provided but Drapeau remained distant from our events and community.

However, under the Doré administration we sat at the policy tables at the levels of the MCM party, the city and the boroughs. This set a pattern for the years that straddled the two subsequent administrations of Borque and Tremblay. Doré’s style of administration was characterized by his receptiveness to voices from the minority communities and the administration’s commitment to creating a socially cohesive Montreal with safe, welcoming neighborhoods.

Black cultural activities flourished under Doré’s administration as part of a very direct and planned strategy of cultural tourism and community development. There was significant support of Black culture, theatre, carnival arts, and festivals. The city’s support and funding of the Caribbean Carnival was at no time stronger than during the Doré administration. In fact, Vue D’Afrique, Carifete/Carifiesta, Rhythm du Monde and Black Theatre Workshop were formally considered as integral elements in the city’s strategic plan for cultural tourism during Doré’s term.

For the first time in the history of Montreal, the City’s administration created a department responsible for cultural communities’ development and hired a significant number of Blacks. Perhaps the most visible association and trend-breaking policy of his administration was the recognition of February as the month that all Montrealers would celebrate Black history and the contributions and presence of Blacks here. There are many Blacks who say that Black History Month should be celebrated every day, not just in February, and there is certainly no one stopping us from doing that thanks to Doré. However, draping City Hall in huge streamers that flow in the wind and read “Le Mois de l’Histoire des Noirs” is no simple achievement in French Quebec. It marks the depth of the relationship between Jean Doré and the Black communities, as well as the respect and value that his administration accorded our place in Montreal. It underlines the pluralism practiced by the new leadership in Montreal and by their initiatives to update and reform the attitudes of the informal, private culture of the city’s civil-service, and police about Blacks.

Doré leaves behind his legacy of humanism, his support and encouragement of our participation in Montreal’s social and political life, as well as the decision-making processes of the city.