With funding from Canadian Heritage, BCRC has been able to mount a seniors’ pilot project which will run between June and December 2015. The goal is to identify the needs of a group of seniors who frequent the Cote-des-Neiges Plaza. Our motivation is to find ways to get to know who they are, to offer them both constructive and social activities, as well as to share our knowledge of the range of the services of which they could take advantage. Two part-time animators have been our ‘boots on the ground’.  Shimmon and Felicia have conducted face-to-face interviews with many of the seniors asking themselves “what are the needs that exist?” They have also put together a survey and did some preliminary research about groups and social services in Côte-des-Neiges that currently exist for all local elderly.

Armed with this plethora of information, Felicia and Shimmon are now hoping to address topics that can resonate with the seniors. The two have now become a resource and, over the course of the next few months, they pull together some workshops to educate our seniors on issues that directly affect the quality of their life.  They are planning to invite groups and knowledgeable individuals to talk about social housing, ageism, isolation, finances, mental health, and family.

Having made some strong connections while engaging with other organizations, there is a strong desire to work in tandem to create a strong support network that focuses on a holistic approach for our seniors.

Certainly, there will be more challenges ahead but BCRC is proud to say that Shimmon and Felicia have shown dedication to improving the lives of this segment of our senior population.  If you would like to contribute your knowledge or expertise with seniors or you would like to give the team a hand, call Shimmon at: 514-342-2247.

By the Seniors Project team.

For several years BCRC has been closely aligned with the activities of the umbrella group called REISA. In fact, BCRC is considered one of REISA’s founding members. While REISA is the French acronym everyone uses, in English it stands for the East Island Network for English Language Services. For readers not in the know, the east-end of the island is generally seen as starting at St. Laurent Street and going eastward to Pointe-aux-Trembles. With BCRC situated in Côte-des-Neiges, it seems unlikely that we would have many of our projects in the east end, since most of our English-speaking Black community that we offer our services to, live on the West side of Saint Laurent Boulevard. But this belies the reality of the English-speaking Black community as it has dispersed over the last several decades. Moreover where there are English-speaking Blacks, we can surmise that their needs are similar regardless of their street address.

Like their Francophone members, English speaking blacks have taken advantage of the relatively lower housing costs of the East End, and for many English-speaking blacks living there it is an opportunity as well to immerse their children in the French culture. For these and other reasons BCRC has never shied away from mounting projects, particularly our school projects, in the East end. These projects, under the auspices of the English Montréal School Board (EMSB) are just one part of the story.  Several years ago, when BCRC was asked to join this fledgling group of English-speaking associations in the East it was clear then that our common interest was to find ways to increase the level of English language services in the health and social service network of the East End– for all English speakers living there. To that end, BCRC and other English language, east-end organizations has been quietly, and not so quietly at times, engaging with CLSCs, the CSSS, various borough and city administrations, and local community organizations serving the population of the East. For years it seemed to be an uphill battle to even get the occasional acknowledgment that there were English speakers living there. Reisa persisted, partnered, and continued to work with Francophones to show that their common wisdom also needed to be revised.

Today we can measure some success in the efforts of BCRC in this partnership. REISA has developed a partnership with McGill University’s health and social services sector and now acts as a bridge to many Francophone East End institutions. We now have a project titled the East Island Retention of Health Professionals. Its mission of course is to increase access to health and social services in English in collaboration with the public/private and community stakeholders while at the same time promoting and supporting the training and retention of health and social service professionals in the East End. Through this method we can ensure that English-speaking minority communities such as Blacks have access to services in their own language without having to travel downtown.

This has been a long time coming and we are very excited to say the project is a go. Therefore, BCRC is now pleased to promote internships for black students currently in school interested in working in the East end with Anglophones. REISA, in hand with the French institutions, have now identified a dozen or so disciplines where there is a need for bilingual support. These range from communication sciences, policy studies, creative arts therapies, nursing, psychology, social work, special care, substance abuse, etc. etc.  I would encourage you to visit www.reisa.ca to check out the complete listing.  The hope is that with the rush to the East end, qualified blacks in our community will find good career opportunities later while serving Blacks living on the other end of our island.

This article was featured in Semaji September 2015. To read the full version Click Here 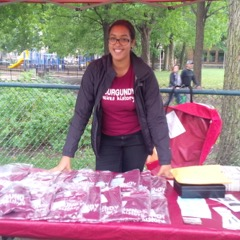 Jennifer Sinclair–I’m one of the animators on the Standing on Their Shoulders team along with Pharaoh Freeman. Since we began sharing Little Burgundy’s Black history we have been met with such enthusiasm and passion from everyone we met. I have spent as much time educating youth as I have spent learning from them and from Little Burgundy’s elders. I feel so fortunate to have been part of this wonderful project. 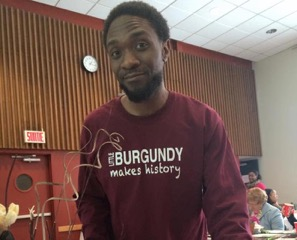 Pharaoh Freeman (aka Robin)–I’m the co-animator on the Standing on Their Shoulder Team alongside Jennifer Sinclair (aka Batman). I’m really excited to be on this project because it gave me an opportunity to work with youth and learn about the rich history of Little Burgundy. I thank the BCRC for giving me this amazing opportunity. 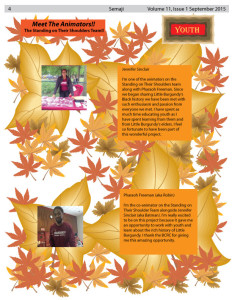 This article was featured in Semaji September 2015. To see the full version Click Here